Anyone hoping for a laid back April before the heat of summer kicks in is in for disappointment.

April is going to see a lot of flux in contradictory energies which are bound to cause some significant shifts. We are ready to be launched into the logical next stage of our longer overdue projects.

The month starts with the fastest planet, which is Mars meeting the more laid back Saturn on April 2nd. Their contradictory influences, one of great thrust versus the other of more slow paced movement, brings out a rather long term running pattern. Get ready to work on some long lasting changes in your life.

Another reason for the flux in this month is due to the fact that it hosts 4 retrograde planets which means that there is going to be a lot of retrospection, be prepared to take your lessons as they might occur.

For the first 15 days, Mercury is retrograde in the sign of Aries. This means that there can be a lot of misunderstandings while dealing with others. Personally, it is a good time to reflect on your goals and conduct till now.

Saturn retrogrades on the 17th, and is bound to bring up discussions on whether or not you are pulling your weight around the house.

Pluto is retrograde on 22nd and will be bringing attention to the flux in the known structure of things. Jupiter’s retrograde will continue to bring out the corruption and the dark underbelly of the world we know.

On the 15th of the month, Mercury will be stationed right the New Moon in Aries, in a conjunction with Uranus. The latter is known to be the agent of change. There will be chaos aplenty as the energy is tantalizing yet disruptive. It is also the time to break away from the old and embrace the new. The New Moon is going to give the much needed energy to make this break.

The very next day, Chiron will move into Aries. Chiron is known for bringing up hurts from the past. Though previously when it was stationed in Pisces, it worked on the injuries brought on by differences and segregation. In Aries, it will shift from these bigger concerns to yet another quite painful aspect; the trials and tribulations of being a free agent.

During these rocky times, it is very crucial that everyone keeps themselves in check. Your emotions are at the risk of running berserk so be careful while dealing with the outside world. Venus is currently stationed in the sign of Taurus. Your dealings will be more reliable and stable. No surprises or great adventures are advisable.

April 18th will witness the Sun crossing Uranus, which will bring great unpredictability to the moment of liberation that is eagerly awaited. When finally on April 24 Venus will move into Gemini, the world will be a bit more relaxed and at ease.

April is a month that promotes forward movement, no matter what the pace may be. April 7th sees Venus trine Saturn which spells out that plans will be given concrete shape. And then, on April 11th Venus trines Mars and kicks open a bag of desires. April 17th Venus trines Pluto after opposing Jupiter and thus intensifies the desires furthermore.

Near the end of the month Sun trines Saturn and gives us the much needed stability that we have been craving this month. Changes are bound to take place, both big and small. It is time to give up reluctance and embrace yourself for the shift. 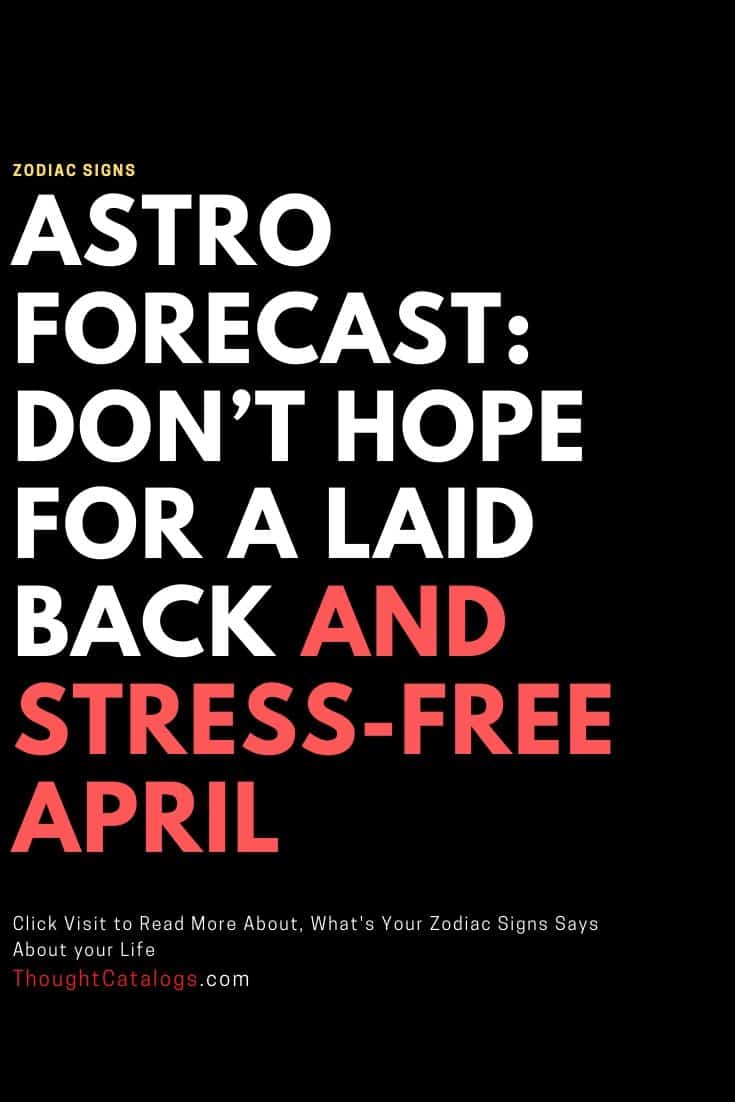