Aries, Leo, Scorpio, Capricorn, and Aquarius are the zodiac signs who MUST win at everything.

How competitive is your personality?

If you were born with an Aries, Capricorn or Leo horoscope, you probably already know that you’re pretty fierce when it comes to establishing your strength and authority.

Even Libra, the most harmonious, balanced sign in astrology can be super competitive about things, but in a different way.

There’s something I love about winning that makes me want to compete with people and show them just how awesome I am.

Of course, that’s only when I’m not actually saying how awesome I am, but you get my point.

When it comes to competition, there are some zodiac signs that take it way too far. They are the ones who like to compete anywhere and everywhere, just so that they can say that they are the best of the best.

And even when they’re not competing, some zodiac sign still have an ability to turn even the most boring or non-competitive situations into a competition.

I don’t know if I would consider that a gift, necessarily, but these zodiac signs seem to think that competition is always the answer.

I know, I know I said that as an Aquarius I don’t have the most competitive personality, but I did say that I still do like competition.

I might not be as cutthroat as Aries or as heartless as Capricorn (it’s true), but I can put my game face on if I have to.

Now, it might just be my personal opinion, but I think a little dose of healthy competition is never a bad thing. It keeps people on their toes and it’s sometimes nice to rub a win in your BFF’s face every now and then, even if you’re just competing for fun.

That said, I would prefer to put my all into a competition with someone, knowing that I’m either going to win or lose, rather than starting a playful competition with my friend that’s just for fun.

That said, I do love competition at work, in an environment where healthy competition isn’t necessarily encouraged, but can help boost everyone’s enthusiasm to work harder and push their limits.

Plus, the end result is almost always positive because you’re already playing on the same team; so, everyone wins! But when it comes to friendly competition, it’s hard for me to get out of that mindset and remember to be playful.

Knowing me, I would inadvertently make it a serious competition for no other reason than wanting to win.

Now that I think about it, maybe I am more competitive of a person than I make myself out to be.

I guess it’s a good thing that I’m on this list, isn’t it? Here are the most competitive zodiac signs of astrology, including myself, Aquarius.

Aries, you love being first in literally every single thing that you do in life, and the only way you know how to be first is by competing with others.

You might try to play it off as playful and not super serious, but when it comes to you, competition is always serious.

You tend to be a sore loser and a very braggy winner.

All of that said, competition is how you keep your energy up. Being competitive gives you energy and meaning to your life, and you aren’t one to deny yourself some fun in life.

While you do like to try to find competition in everything you do, you’re really only ever seriously serious about it when it comes to things and situations that are important to you.

Leo, your love of competition comes from wanting to be the best of the best at work.

You love the idea of getting ahead in your career through competition because you like the thought of having a good time while still showing everyone around you that you are the greatest.

When you do compete, you try to keep it lighthearted and fun because you don’t want to be known as the person who can only crack a smile when she’s beating everybody else down.

When it comes to your personal life, including your friends and family, you don’t really have a competitive side.

Unless you’re just being playful, you don’t really see the point in competing with people for fun.

You like to leave the competition to your professional life where you can really shine without worrying that you’re going to hurt someone’s feelings or be too competitive.

Scorpio, your love of competition goes hand-in-hand with your passion for life.

You might not necessarily like competing with someone, but you do get very excited in certain situations and can’t always control yourself.

Because you’re a fire sign, you are very exuberant and thrive on the excitement that life brings.

Sometimes, life brings competition, but you try to keep it playful no matter what.

You might seem like a very intense zodiac sign, but in reality, you are a lot more sensitive and fun-loving than people give you credit for.

You would rather keep things lighthearted than possibly lose a friend because of hardcore competition.

That said, if you are feeling competitive and not in a lighthearted way, then you’re not one to show mercy to the people you are competing against.

Capricorn, you love competition because it is your way of showing other people that you truly are the GOAT (greatest of all time).

Plus, you like the thought of being the one people come to when they need help with something. And if that means having to beat them down a couple of times in competition, then so be it.

For you, competition is all about giving it your all and not showing any mercy. When you compete with people, your only thought is winning.

Luckily for you, you are not that sore of a loser, even though you don’t really like losing anyway (who does?). But instead of getting upset over it, you know that all you need to do is keep competing until you win.

When it comes to competition, you can turn into a completely different person; one who wants to win at all cost.

Aquarius, you are one of those competitors who likes to keep the competition to themselves.

That means that you might not readily admit that you like competition, but when you have a chance to compete against somebody and possibly win, you’re all over it.

For you, competition is about proving to yourself that you are the best.

You don’t necessarily care about beating out the other person just so you can hold it over their head, but you do want to prove that you have it in you to compete.

Another thing that you don’t always like to admit it is that you can sometimes get very jealous of others.

And even when there isn’t an actual competition going on, you sometimes create a fake competition in your head just to see if you can get rid of that jealousy you’re feeling.

It might not mean much to beat out a coworker on a project you’re both working on, but to you, it means that you’re able to push your limits and still achieve something meaningful. 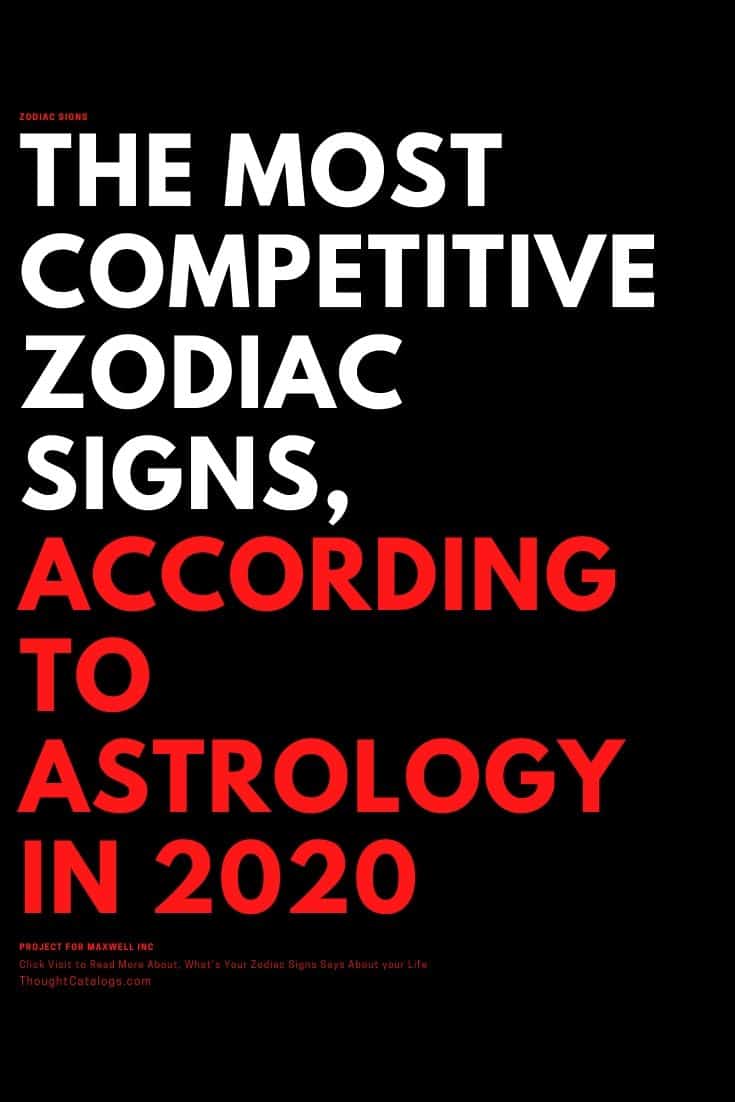