The four signs of the astrological chart – Fire, Earth, Air and Water – each represent a certain kind of energy and method of perception that people who fall within these signs follow. The earth signs – Taurus, Virgo and Capricorn are known to be more in harmony with the physical form of the world and have an uncanny ability to utilize the material objects and improve them with time.

Read on to know more about characteristics specific to the Earth signs!

1. They are patient beings

Despite being considered cold and aloof many a times, earth signs are actually patient people. They have endless patience and actually like waiting for the right people in their life. And they definitely never quit – even when they probably should.

2. They love to be spoiled

Earth signs love being pampered and spoiled by people. Whether it’s by good food, a nice gift or a great day at the spa. They are the luxury lovers!

3. They are practical and levelheaded

The earth signs connect with the world based on their five senses. If they can’t hear, see, smell, taste or touch it, chances are they are not going to understand it too well. They believe in not living with their heads up in the clouds but instead with their feet on the ground.

Lists, lists and more lists. Earth signs like to know what they are going to do the for the rest of the day and feel immensely at peace when they can tick everything off their to-do list!

5. They have a keen eye for detail

Though they are perceived as critical beings, it’s only because they have a keen eye for detail. And with such an eye, it is difficult to overlook the flaws. However, their boon usually turns into a bane because they become the automatic fault-finders!

6. They are great communicators

You can count on the earth signs to get talkin’! Their love for communication, however, includes talking and listening in equal amounts! So you can count on your “earthy” friends for when you really need a shoulder to cry on.

7. They are quick to act

Earth signs are quick on their feet. They are oriented towards what’s real and this quality not only makes them more productive but also helps them create doable and tangible decisions.

8. They are highly analytical and introspective

Earth signs love to think and question their own beliefs and ideas. While they never shy away from pointing out someone else’s flaws, they also have a self-examining behaviour which often is the cause of negativity and sadness in their lives.

9. They are also the taskmasters

They don’t just love doing tasks but also have a fun time handing out work and acting like the “boss” when among a group of people. This makes them natural leaders!

Even though they generally don’t like living in the clouds, one thing that the earth signs are never satisfied with is their position in life. They always want more and better. They are strong minded and ambitious people who know how to work hard and reach those heights.

11. They prefer quality over quantity

Since they enjoy luxury, they always prefer quality over quantity. This could be in relation to material as well as non-material things. They will go for an expensive dress from a branded store over multiple cheaper knock-offs… They will also make similar choices when it comes to relationships. They will go for stronger, meaningful relationships rather than flings.

12. They are cautious in nature

The earth signs find their duty to throw caution at themselves…and everyone else. “You shouldn’t”, “Better not”, “Let’s take things slow” are their go-to phrases! They set down their rules and like to live by them in a disciplined manner.

13. Once they form an opinion, they hardly ever change it

Though they might not always be quick to judge people, once the earth signs form an opinion about you, they will definitely not change it! No matter what you do, say or how much you try to alter it, earth signs remain fixed on what they believe. 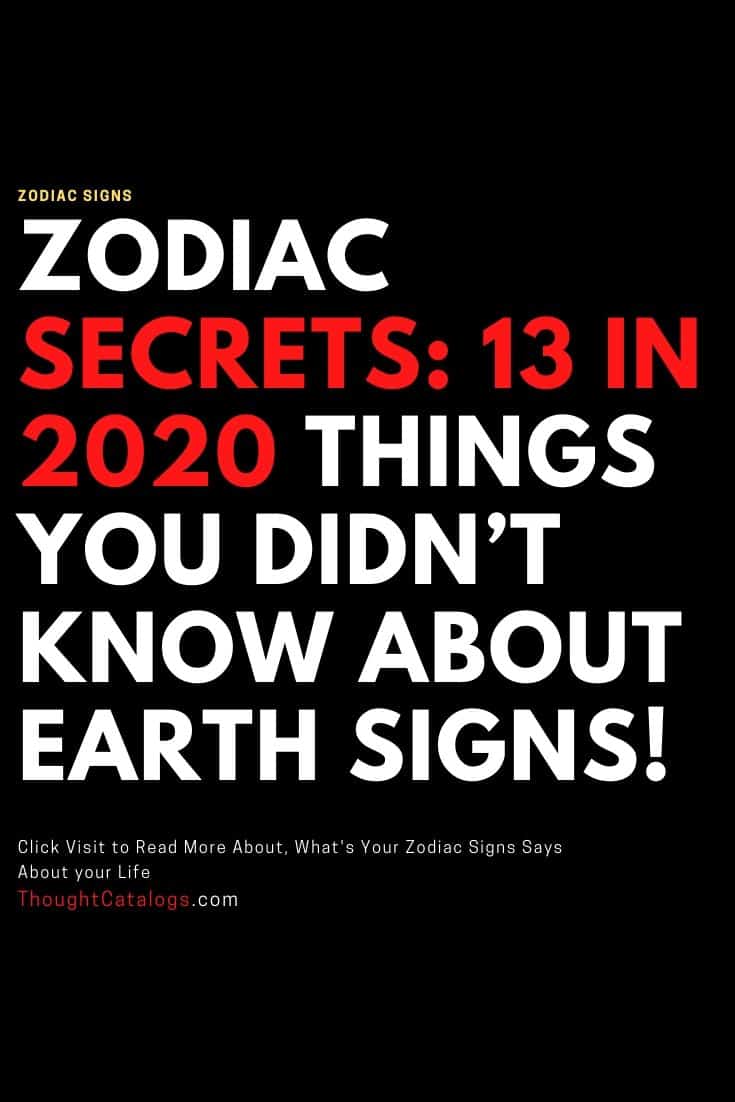