Uranus retrograde may not have been common, but it has happened this year. August 7th saw it entering retrograde in Taurus and it will remain so till the 6th of January. So, this holiday season, be ready to feel a bit of a shake-up from the Uranus retrograde.

In general, retrogrades are known to bring about some weird changes. On top of that, Uranus is rebellious – it’s innovative and brings about radical changes in unexpected moments.

It’s not something you need during Christmas. But since the planets have decided to go on a retrograde, we can’t really do anything about it but accept it as it is. However, we can be aware of what it can lead to:

The Uranus retrograde is bringing in change – it’s going to make us more capable of getting rid of things that we don’t want, things which don’t serve a higher purpose. This is good news – change might be difficult but letting go of the bad is the first step towards a positive future. It’s best that it will happen now before the New Year begins.

We can accept the new year with our new self. But there’s the catch – Uranus is rebellious. The change this retrograde shall bring will be reckless and sudden. It can turn your world completely upside down. Most of us want to take things slow – get used to the idea of change before letting it come to us.

Adaptation is the key. For Uranus, that is not the way. Expect a lot of drama when this change happens. Think things through but don’t be afraid of experimenting and trying something out. Since this retrograde is making Uranus go backward, it means that there will be inner progress rather than an outer one. Experience the change from within.

A sudden change around Christmas? No wonder it is going to affect your shopping habits. Just don’t let a sudden fancy that comes to you catch you off-guard. You might not even focus on acquiring things anymore.

The holidays may enrich your spiritual life and take you away from your materialistic ties. Instead of buying more, you might be giving away – letting go of the past – of possessions that weigh your spiritual side down. It’s a great change to start the year with – you might feel whole, mentally and spiritually.

Some drama around relationships

Uranus is rebellious and the change that it brings is radical – sudden and huge. This change can often be around relationships – a terrible thing to happen during the holiday season. You can expect some drama in your relations, so before jumping into conclusions or taking impulsive decisions – think things through! The planets are influencing you in some way.

Lisa Stardust says that this problem is made more complicated by the Mercury retrograde. Wasn’t it supposed to end early in December? You are right but the shadow period continues till 24th of the month. It adds some stresses during the holiday season. There might be some encounters with people from the past whom you do not want to meet.

Relationships will become a bit more complicated. Uranus will get stimulated by the Nodes of Destiny. You will make some choices which are fated and you have no control over, like running into your ex or having your friend drop a meeting with you in the last minute. It’s as Aliza Kelly Faragher says – you have to expect the unexpected!

It doesn’t look as worse as we thought it would. Yes, there are sudden changes in your life but Uranus brings it for your own good. If we go with the flow and take some of the right decisions along the way, we can do amazing things this holiday season.

Uranus brings fate into our lives – so, rest assured, we are moving towards our destiny’s calling. 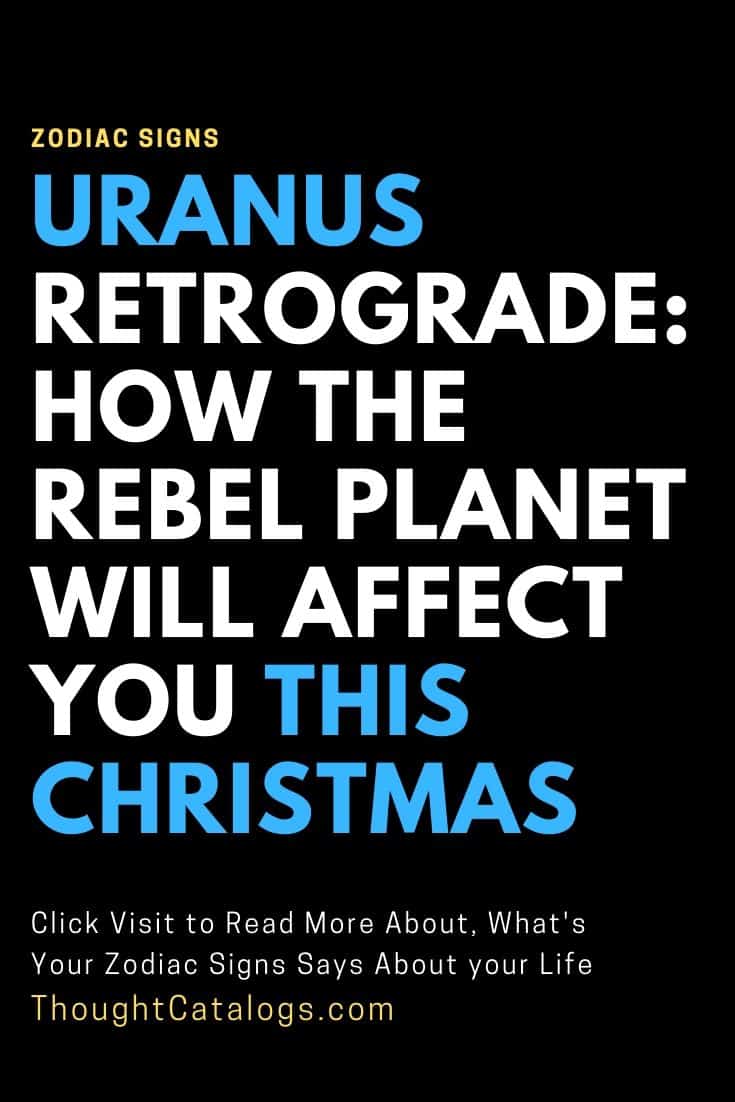 Previous Article How You’ll Survive Mercury Retrograde, Based On Your Zodiac Sign
Next Article The ‘Ring Of Fire’ Solar Eclipse Has A Lot Of Surprises In Store For Us This December