One of the worst parts about breakups is eventually having to deal with your ex. Some choose to keep them as friends, while others try their hardest to remove every aspect of them from their lives. But sometimes, they still find their way back, whether it be to beg for a second chance or by pure coincidence. Either way, there’s no escaping ’em. Based on your zodiac sign, we know how you act around your ex post-breakup. Scroll below to see if we’ve got you all figured out! Related: These MEAN GIRLS Quotes Make Fetch Captions

You’re not one to let go of your exes too quickly, Aries. Because you’ve developed such a close relationship with them, you tend to keep them by your side as friends. But it’s done in much more of a keep your friends closer and your enemies closer type of way. You just want to make sure they’re not out there bad-mouthing you. If you find out that’s what they’ve been doing, you’re quick to call them out. No one puts you in a corner.

You’re a true romantic at heart, so breakups are pretty tough for you to deal with. You spend most of your time crying and stalking your ex on social media after the fact. When you bump into your ex post-breakup, it usually isn’t by accident. You did your research, found out where they’d be and showed up. While you probably wept over them the night before, you wouldn’t tell them that. You’d act like you totally forgot about them the second your eyes meet. Don’t hate the player, hate the game.

Because you’re represented by the twins, it’s no wonder you have two sides to dealing with your ex. One day, you’ll be fine and act all buddy-buddy around them. The next day, you’ll find yourself wanting to break down when you’re around them. The good news is, you tend to move on relatively quickly after a split.

You’re an emotional sign, so it’s obvious you get pretty hung up after a tough breakup. The only person you’ll let see you cry and yell is you, however. Around everyone else, including your ex, you’re as strong as stone. You don’t let anyone see you crack, because that’s just not how you roll. But once everyone’s gone, your walls come crumbling down.

You always have to be the center of attention, even after a breakup. You’re quick to move on and bring someone around that’ll make your ex jealous. You rub this individual in your ex’s face whenever you can, but you’re not really that into them. You just want your ex to know that they walked away brokenhearted and you’re totally fine, even if that’s not entirely the case.

Analytical and practical, you deal with breakups in a more rational way than most. You’re not one to let your emotions get the best of you, especially when you see your ex. You don’t want anything to get too out of hand, so you just avoid them at all costs. Giving them the cold shoulder is the best way to go, as far as you’re concerned.

You’re the most social of the zodiac signs, Libra, so you’re always surrounded by tons of people. This is great when you’re dealing with a breakup, because they serve as the ultimate distraction. Unfortunately, you’re not one to let your ex go so easily. Even when your friends try to stop you, you still try your hardest to always be by your former S.O.’s side. Parting is such sweet sorrow that you’re not ready to fully deal with yet.

You’re cool as a cucumber all the time, even after a breakup. It’s actually a talent how calm and collected you are when your relationship ends. You act like it’s no big deal. You might be upset, but you always find a way to maintain a pretty tranquil presence whenever your ex is around.

Moving on from your ex is relatively easy for you. In the beginning, you’ll find yourself wallowing in self-pity. You snap out of that pretty quickly, though, and will then try to befriend your ex. You don’t want to have any bad blood between the two of you, so you keep them pretty close by your side. But even if you act like you’re over them, you secretly wish you could make amends and get back together. Here’s hoping!

You’re a very giving person when it comes to relationships, Capricorn. You always want your partner to know you’re there for them no matter what. So when your relationship ends, it’s pretty rough for you. You tend to pester your ex about what went wrong until they give you the answer you want to hear. Even when you eventually move on, you never truly forget this person.

While most of your relationships end pretty amicably, you always make sure everyone knows your ex was the one who messed up and ruined what you had. You might act like everything’s fine whenever you see them, but you tend to smear their name all over town. You can’t have anyone thinking you were the one who messed it all up.

You’re a hopeless romantic who lives in a world of fantasy, so breakups are one of the worst things that can happen to you. They throw you off like no other, which is why your emotions tend to get the best of you. Therefore, seeing your ex means you’ll likely break down in their presence. They tend to be kind and help you get through it, but eventually you’re forced to deal with the outcome on your own. 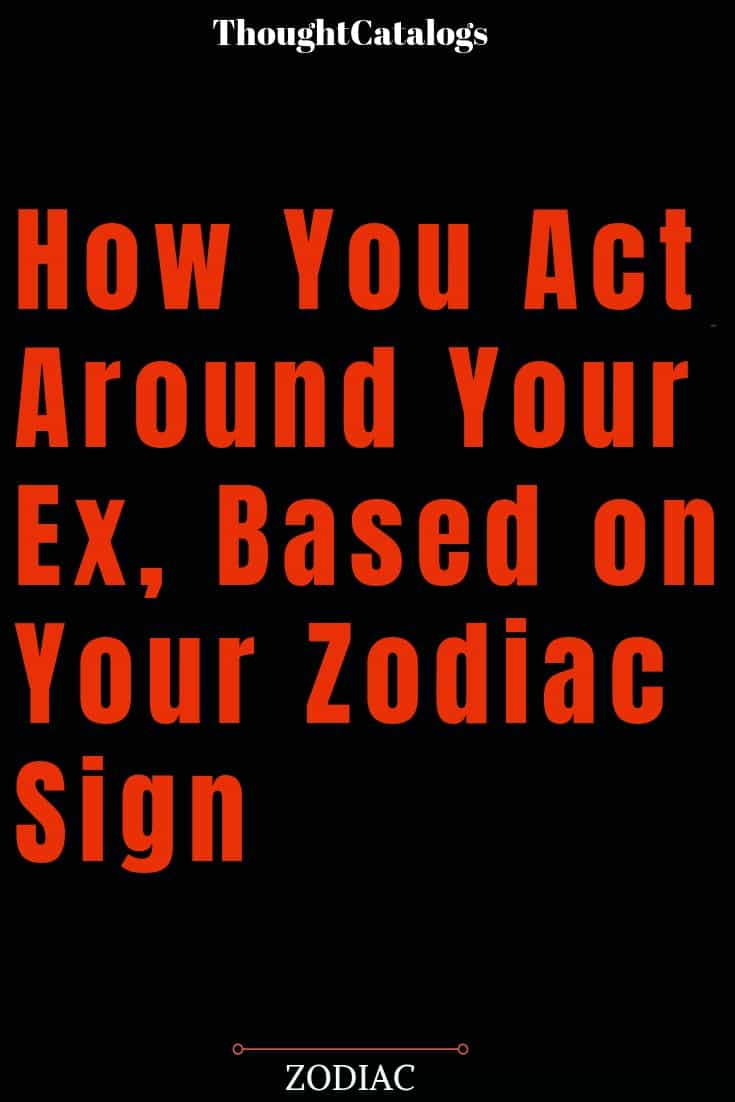