Everyone gets stressed. But when it comes to massaging your mental knots, some tactics work better than others, especially for the different signs of the zodiac. See below for the best ways to de-stress, according to astrology.

ARIES: GO FOR A RUN

Aries is a highly kinesthetic sign, and when they reach their breaking point (probably because someone is walking too slowly in front of them), it’s especially cathartic to release stress with their bodies. On top of that, Aries is the sign of speed, so the state of fast, perpetual motion is as calming for them as stillness is for others.

Taurus is ruled by Venus, the sign of luxury and beauty. As such, Tauruses feel most at ease when indulging in anything that delights the senses. To calm down, a little aromatherapy with essential oils will help the zodiac’s bulls believe in life’s beauty—or at least its ability to smell fabulous.

Geminis love words, and even the quietest and most introverted among them find catharsis in organizing their thoughts and feelings into sentences. Geminis tend to be mentally scattered, so it’s especially helpful to focus all that mental energy into a low-stakes free write for 20 minutes or so. You might even like what you write when you’re done.

CANCER: OPENING THAT BOX OF MEMORIES

As the most sentimental sign of the zodiac, Cancers have a deeper appreciation for nostalgia and history than the rest of us. When the world is too much to deal with, they can get zen by looking through memorabilia—whether that’s an old shoebox of love notes from a former flame or their high school yearbooks filled with well-wishes for the summer and promises to keep in touch. Grounding themselves in their personal history will be the balm that soothes their nerves.

Before you clutch your pearls, remember that Leo is the sign of self-love! Not only that, but it’s well established in the research community that a little onanism (look it up) on the regular will benefit both the body and the mind. Yes, you can become a little smarter and better emotionally regulated by getting down with yourself, and no one more than the Leo can appreciate that groove.

Virgos minds are rapidly at work 24/7 (and then some) as the zodiac’s master organizers. To help release all that stress, a little classic yoga is an especially effective way for them to let go. Yoga is all about surrender, and as Virgos tend to work so hard out of duty, this practice can help them, at least temporarily, serve a different god than the god of productivity.

When the world isn’t delivering the romance we all deserve (hardly ever, actually…), Libras will find they can pick themselves up by re-watching their favorite rom-com and mouthing along with the dialogue because they know the entire movie by heart. Because they love love and sometimes only When Harry Met Sally can do the trick.

Scorpios are deeply emotional and need to retreat from the world from time to time. To recharge their batteries, they are best off losing themselves in whatever music suits their mood. If they can feel submerged in a song, it makes their own huge feelings seem way more manageable. Sometimes, that’s enough right there to lower the rapid heart rate.

While Geminis have the biggest reputation for excessive talking, Sagittariuses are the real motormouths of the zodiac. As such, the best stress reliever for chatty centaurs is actual talk therapy where they can unload whatever drama du jour is unfolding around them. But with a therapist present to ask guiding questions, they are more likely to realize that the drama was within them the whole time.

Capricorns are naturally hardworking, and in part, that’s because they appreciate the wave of satisfaction that accompanies a job well done. When they need to unwind, they can replicate that reward-scenario with lower stakes by applying it to a simple chore—one that has a clear beginning, middle and end, like folding laundry or washing dishes. Not so strenuous that it becomes actual work, but enough of a structured task to make them feel all “mission accomplished” when it’s over.

Aquariuses are highly intellectual, even in the pursuit of calm. A little mental exercise in the form of a board game or trivia with friends can help the water bearers get into a flow state, especially if it’s on a familiar topic. For some, competitive games only up the stress levels, but a cool Aquarius can handle it. The short-term focus will relieve them of the 400-500 other ideas swirling around in their head.

As the most spiritual sign, Pisces find the quickest path to zen is the most straightforward route: meditation. Pisces are hypersensitive (it’s what allows them to be such brilliant artists/problem-solvers), but it means they need truly peaceful conditions to rest their senses. Lying down on their futon probably won’t cut it. Sensory deprivation tank, anyone? 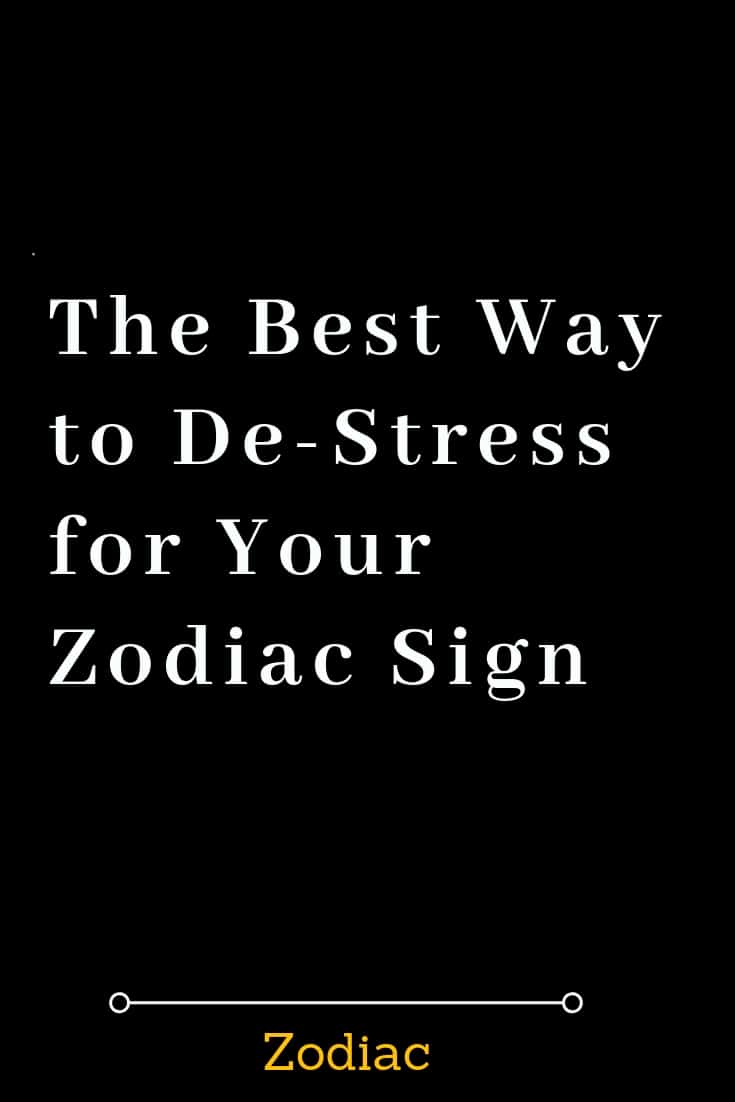