We can look to our zodiac sign to help us possibly learn all types of things about ourselves, from others who we will be more compatible with to how not to be self-centered. All signs in the stars have their share of the good and the bad, which may not always apply to you, but tips from astrologers may give you insights into your personal characteristics, as well as the way you’re being perceived. Feel like you may be misjudged as too inwardly focused? You may be able to figure out in what areas you might be coming off as selfish based on your zodiac sign and how you can improve.

As a certified health coach, I encourage clients to dig deeper into their souls and rooted desires and stay in touch with their feelings, tendencies, and actions, whether good or bad. It’s a matter of understanding yourself first, so that you can then improve where need be in order to not alienate yourself from others or regret your behavior. And, it’s also important to think of others’ traits and habits based on their zodiac signs, too, because it may help you learn something about their seemingly selfish habits. Here are a few ways that those selfish urges can manifest themselves, based on the stars.

Aries’ “me first” mindset can be selfish at times. “The ram goes to war for just about anything, and it doesn’t help that they’re extremely competitive too,” astrologer Valerie Mesa tells Bustle. “Long story short, Aries’ main mission in life consists of getting to the finish line before anyone else,” says Mesa.

“On a brighter note, Aries’ personality is overflowing with high energy and enthusiasm; it won’t be long before the ram has a new project and/or hobby,” says Mesa, where they can put this drive to good use. Once Aries can learn to share those hobbies with others, and incorporate that energy into a project that can build friendships, they will definitely seem less self-centered.

Taurus’ obsessive need for stability may come across as snobby and materialistic at times, unfortunately. “They more than often choose the easy and comfortable route, which in turn can be seen as plain greed and selfishness,” says Mesa. This may alienate others.

“However, Taurus is quite savvy in the finance department, not to mention incredibly reliable,” says Mesa. That stability and reliability can definitely carry over to relationships, where Taurus can make friends to be fiercely loyal to.

Which side of Gemini are you referring to? “Depends who they’re channeling that day,” says Mesa. “The sign of the twins is notorious for being fickle and changeable, and well, don’t be surprised if they completely dismiss you,” says Mesa. “Lucky for you, Gemini’s hysterical wit and contagious giggle makes up for their fickle mood swings,” says Mesa, so they’re good company.

As a fix, Gemini can just work on being a bit more reliable, and use that natural joy to entertain people while building solid relationships.

Cancer likes to play the victim at times. “It’s never about you and always about them,” says Mesa. “Sure, the crab gives great advice, but rest assured, the moral of the story consists of how much pain and suffering they’ve endured in their lifetime,” says Mesa. So with this sign it may hard to snag some attention yourself.

“Although, don’t be fooled by their hypersensitive personality — the crab will always be the one to lend you an ear and a shoulder to cry on,” which makes them awesome partners and friends, says Mesa.

“Similar to their sister fire sign Aries, Leo loves to win,” says Mesa. “But while Aries goes to war for first place, Leo is constantly fighting for the spotlight.” On the darker side, their attention seeking personality may turn into vanity and egoism, and this can be distancing towards those who care for them.

“Lucky for you, Leo’s friends and family are always VIP. This fire sign will forever shower you with love, laughs and the most thoughtful gifts,” says Mesa. When it comes down to it, Leo has a lot of love to give. Once a Leo realizes the spotlight isn’t everything, they can be a caring companion.

“Despite Virgo’s hardworking personality and love for perfection, this earth sign’s eye for details can easily turn into obsession and intense criticism,” says Mesa. “It is important for Virgo to hold off on critiquing and let the people around them make their own decisions.” It can feel like it’s a Virgo’s world and we’re just living it, at times.

“Although, if you really think about it, what would the world be without Virgo’s precision? Virgo is the reason behind anything and everything that gets fixed and/or improves for the better,” says Mesa, making them really valuable and helpful at times. As a friend, Virgo could be your best problem solver.

Sure, Libra is an air sign but this doesn’t mean they’re independent per se. “The sign of the scales hates to do things alone, and this could potentially bring them empty connections and superficiality,” says Mesa. “Their dependency issues and overall need for company can come across as selfish and spoiled, too.”

However, Mesa adds, “Libra’s contagious charm and tactful personality make them a delight to be around.” How can anyone resist them? Once those personable characteristics are aimed toward meaningful relationships, Libras can be far from selfish.

“They are the epitome of selfish,” says Mesa. “Known as the most extreme sign in the zodiac, it’s black or white for Scorpio. They’re often jealous, obsessive and naturally skeptical. Scorpio won’t even consider opening up to you unless you show them your soul first.”

But, you don’t always have to be afraid of the stinger. “Scorpio is incredibly observant and a natural-born psychologist. Under their guard lies a plethora of truth and emotional strength,” says Mesa. This can be great for making bold connections and knowing the importance of authenticity.

Sagittarius is the life of the party, but their obsessive need for freedom and adventure might like maturity. “There’s a time and place for everything, Sag,” says Mesa. “This fire sign is a kid at heart so their personality can appear as selfish, when the truth is really, they’re just immature.”

But Sagittarius isn’t always this way. “Sagittarius’ perspective and truth-seeking personality can be incredibly inspiring,” says Mesa, where they can create really strong relationship with people built on intimacy and trust.

Capricorn can be tough to soften up. “Capricorn can be cold, cut throat and determined. You think that’s selfish? They could care less,” says Mesa. “They can sometimes come across as pessimistic know-it-alls, and their drive for success stems from their power-hungry personalities. Anything you can do— Capricorn will do better. They’ll make sure of it.”

Yet, these qualities these qualities can be a positive; Mesa adds, “this kind of determination doesn’t come around very often. The sharp focus of a Capricorn is unlike any other.” Just remember Cap, soften it up a bit, and those you care about most will feel the focus of your love.

“Aquarius is dismissive and stubborn AF, at times,” says Mesa. “Also known as the social rebel of the zodiac, the water bearer will stop at nothing for their voice to be heard, even if that means hurting someone’s feelings.” And while Aquarius definitely does have feelings, they can sometimes be good at brushing them away. But, what would we do without their rebellious ways?

“Aquarius is the reason we march for our rights and think collectively as one. Aquarius represents society as a whole,” says Mesa. And that sense of altruism is the least selfish thing about Aquarius.

Yes, Pisces is loving, sentimental and caring, but their terrible mood swings and ocean of emotions can come at you like a tidal wave when you least expect it. “The fish is hypersensitive, constantly picking up on other energies and emotions; this in turn confuses them into thinking those vibes/feelings are their own when they’re not,” says Mesa. “This water sign has absolutely no control over their emotions, which in turn can appear as self-centered and selfish.”

However, there’s a lot more to their emotional high tides. “Pisces is incredibly gifted from both an intellectual and artistic standpoint. This water sign exudes magic and fantasy, but they’re also capable of incredible artistry and scientific discovery,” says Mesa. If Pisces chooses to share these gifts with others, they can form meaningful, selfless connections.

While zodiac signs may not be a dead ringer for your true personality types, they may give us clues into how we can around potential weaknesses. Who we are and how we behave — the good and the bad. 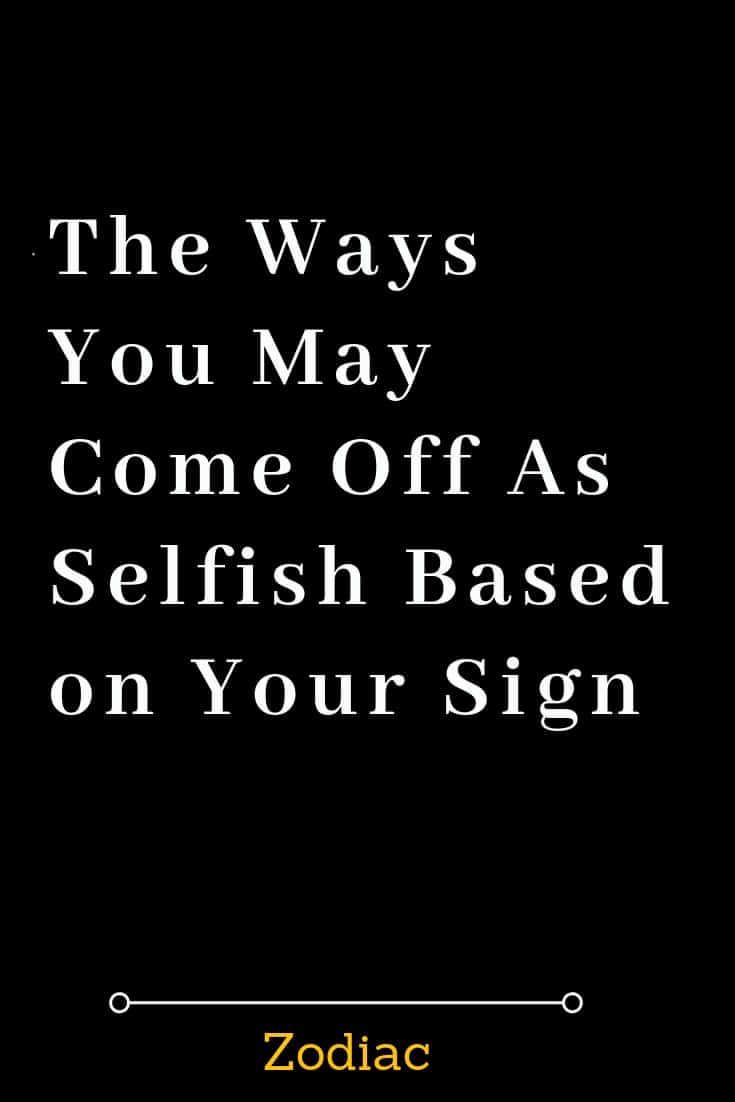 Previous Article Ranked: How Into PDA Is He? Based On His Zodiac Sign
Next Article Zodiac Signs EVERYONE Wants