Hey, Upper East Siders. The final episode of Gossip Girl aired in 2012, but that hasn’t stopped us from talking about it on the regular since. In the spirit of throwbacks, let’s explore, shall we, which GG character we’d be, solely based on our zodiac signs.

Real talk: If you had a sister like Serena, you’d probably get tired of her antics pretty damn quickly. That is, unless you’re a loyal, empathetic and family-oriented Aquarius like the younger van der Woodsen. Like any good water sign, you and Eric march to the beat of your own drum and never really do what’s expected of you.

As a Pisces, you might be tired of always being pigeonholed as the sensitive, artistic type, but honestly, if the leather wristbands and crossbody satchel fit…Like Jenny and Dan’s dad, you’re a kind, creative dreamer. Water signs like Rufus are idealistic—sometimes to a fault. To make sure your head isn’t too far in the clouds, surround yourself with people who will ground you to reality—much like his children did whenever Rufus brought up his Lincoln Hawk glory days.

Remember in season two when Elizabeth Hurley makes a brief (and, in hindsight, kinda weird) appearance as a fling for Nate and offers Vanessa $10,000 and Vanessa turns it down? Total you move. As an Aries, you’ve got a lot of pride, friend. You’re resilient, driven and enterprising. Great traits regardless of whether or not you’re an enterprising Brooklynite trying to fit in with the rich kids at NYU.

You’re independent, persistent, stubborn and have a truly top-notch collection of pocket squares. Joking about that last one (unless you’re more like Chuck than we thought), but the younger Bass is a Taurus through and through. Sure, you can be self-indulgent and materialistic, but you’re also hugely generous with your time and resources.

OK, the whole two personality thing can be used for good, but it can also, as proven by Gossip Girl’s fiercest villain, be used for not so good. But every sign has its less flattering parts, so let’s focus on the positive: Most Gems share Georgina’s smarts, quick wit and chameleon-like versatility. You might not love being thrown into unfamiliar situations, but you’re really, really good at it (and hiding your trepidation).

Like the Waldorf family maid (and arguably Blair’s moral compass), you’re a fan favorite, Cancer. You’re the kind of person people want in their corner, thanks to your sensitive heart and fiercely loyal nature.

You don’t seek out the spotlight, the spotlight seeks out you. (Well, sometimes you seek it out.) Leos like Nate have an effortless glow that draws people to them. You’re a hopeless romantic who prides yourself on being authentic and optimistic. You also, depending on how Nate-like you are, are, like, really, really good-looking.

Hey, have you ever created an online alter ego after becoming obsessed with someone you spoke to for five seconds at a party years ago? Probably not, but that’s not to say you wouldn’t. Classic Virgo move. You and Dan are hardworking overachievers who prefer to remain behind the scenes. Like Lonely Boy, you can be a little judgmental, but you’re always harder on yourself than you are on others.

You know those people who enter a room and immediately have all eyes on them? Yeah, that’s you…and the Upper East Side’s most troubled blonde bombshell. Basically, you’re a crowd-pleaser. You’re charming and comfortable in the spotlight, but you also have a tendency to have a bit of a wild side, so maybe stay away from Georgina Sparks-esque influences.

Blair might not have been as ostentatiously spotlight-stealing as Serena, but that doesn’t mean she’s any less of a Queen B. Scorpio ladies are focused and intuitive. They know what they want (ahem, Chuck), and will do whatever it takes to get it. You’re also a super motivator, and you help the people around you become the best version of themselves (ahem, Chuck again).

Open-minded and creative Sags thrive in unconstrained environments. Aspiring fashion designer Little J might not have had the longest run on Gossip Girl (she was only part of the main cast for the first three seasons), but in true fire sign fashion, made an indelible mark on the show—in her case, in pitch-black liquid eyeliner.

Some people freak out in the face of stress; other people are Capricorns. You and Lily have this in common: An uncanny ability to remain composed and levelheaded in the face of commotion. You’re practical, ambitious and disciplined—meaning pretty much no one (not even your maybe-deceased husband’s scheming brother Jack) can stop you. 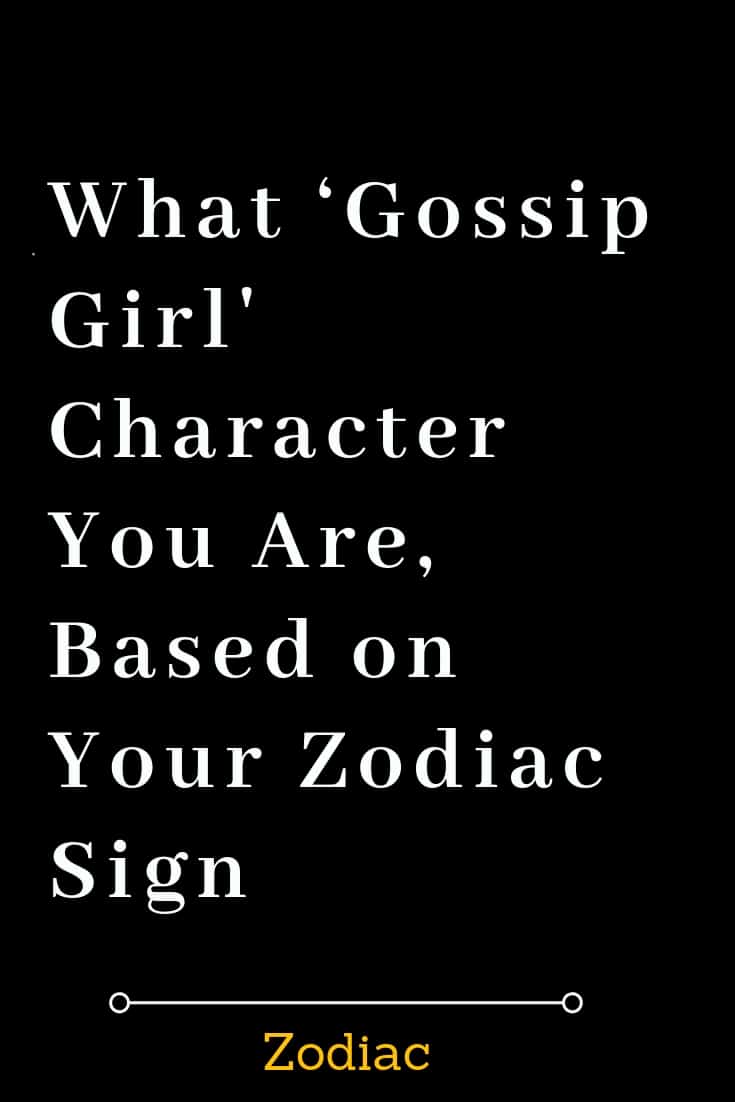 Previous Article Zodiac Signs Ranked From ‘die For Love’ To ‘die Alone’
Next Article This Is How He’ll Sabotage Your Relationship, Based On His Zodiac